ZEP’s response to the European Commission’s Green Paper, “A 2030 framework for climate and energy policies”

Indeed, in the EU Energy Roadmap 2050, CCS plays a key role in every scenario as a critical technology for decarbonising the power sector. Failure to ensure CCS deployment in energy-intensive industries – for which no alternative decarbonisation route exists – will also undermine the EU’s ability to achieve its long-term climate goals, as shown in ZEP’s new landmark report.

ZEP is therefore surprised that CCS is not represented in the key findings of the Commission’s roadmaps listed in the Green Paper and strongly recommends that any follow-up to the CCS Communication is treated as integral to the work of the Green Paper. Sufficient support – in terms of policy, funding and regulatory framework– must be put in place to ensure critical low-carbon technologies are commercially available once the carbon price reaches adequate levels. The RES 20% mandate and measures for energy efficiency have gone a long way to facilitating their deployment – while CCS has not benefited from such support measures.

ZEP therefore calls for the Commission to put forward proposals for some form of directed support for CCS – designed to deliver an ambitious milestone consistent with the EU’s published roadmaps and in the context of the ‘2030 Climate Milestone’ ZEP calls for here as part of the 2030 EU climate and energy framework. 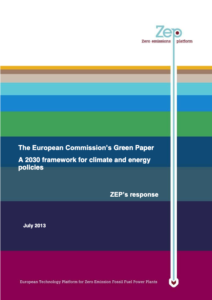