The 2013 edition of ZEP’s General Assembly will take the form of a Public Hearing in the European Parliament to discuss ways of Unlocking the potential of CCS through the EU 2030 climate and energy framework.

The hearing will be hosted by MEPs Jerzy Buzek (EPP, Poland), Chris Davies (ALDE, UK) and Teresa Riera Madurell (S&D, Spain), making this a truly cross party and cross party event which will see the participation of several high-level speakers from the EU institutions, international organisations, industry and ZEP.

CCS will be discussed as a critical component in the upcoming EU  climate and energy framework for 2030, as well as a key contributor to the economic and social agenda in Europe.

Interested in further information or in attending the event? Please send an email to the ZEP Secretariat: info@zero-emissionplatform.eu. 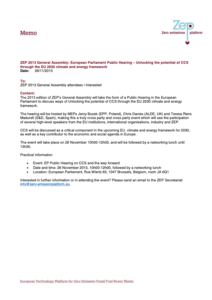