“We are very supportive of the EU’s efforts to increase climate ambition. This is consistent with the science behind the Paris Agreement, and the goal of limiting the global temperature increase to 1.5°C.

The IPCC 15th special report agrees with the overwhelming body of evidence which concludes that CCS is extremely important to achieve deep mitigation, due to its ability to reduce emissions from industry, heat and transport as well its role in removing carbon dioxide from the atmosphere. Indeed, the report is clear that energy intensive and process industries cannot achieve the Paris Agreement targets without CCS.

The benefits of CCS go far beyond climate mitigation. Indeed, ZEP’s recent analysis shows that the value of CCS to Europe’s economy exceeds one trillion euros by 2050. CCS could also create and retain a significant number of jobs in some of Europe’s key industries.

In light of the above and to ensure Europe remains on track to meet the 1.5°C goal, it is essential that the EU Parliament rejects Recital R in its entirety in tomorrow’s COP24 Resolution, which states that “CCS therefore cannot be counted upon as part of any mitigation solution”.

We look forward to working with European Parliament representatives to discuss how we can collaborate on the actions that will be needed to deploy CCS and deliver a 1.5°C goal.” 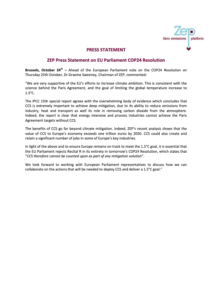