The ZEP Network Technology co-chairs and further experts from the research constituency were engaged in preparing a fact-based, academic paper on low-carbon hydrogen. The ZEP paper provides a realistic picture of blue hydrogen and its role for Europe to reach climate-neutrality.

ZEP has read the study “How green is blue hydrogen?” by Howarth & Jacobson and recommends readers to be very cautious as the conclusions from this study do not apply to Europe. Howarth & Jacobsen assess and draw conclusions on the climate benefit of low-carbon hydrogen. The following points summarise the assumptions in the study:

Moreover, the European Union understood and anticipated some key questions on the manufacturing of low-carbon hydrogen by adopting a regulatory framework based on full life-cycle analysis of greenhouse gas emissions and by taking into account upstream fugitive emissions, as outlined in the regulation on a EU Taxonomy for Sustainable Activities. 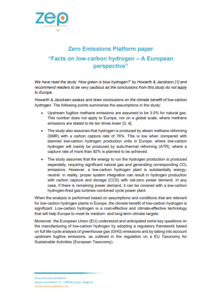