Brussels, 22 April 2021 – On 21 April – just ahead of Earth Day and the United States Leaders Summit on Climate, which the European Commission and Council will attend – the European Parliament’s and Council of the European Union’s negotiators have reached a provisional agreement on the European Climate Law, which proposes a legally binding target of net-zero greenhouse gas (GHG) emissions by 2050. An ambitious net emissions reduction target of at least 55% by 2030 compared to 1990 levels has been agreed, seeing the target increase from 40% previously.

Reaching net-zero GHG emissions in Europe by 2050 will entail a major transformation of the European economy. Energy-intensive industries that are at the core of Europe’s economy will be at the centre of this transformation. Carbon Capture and Storage (CCS) technologies will support a cost-efficient industrial transition towards net-zero and can contribute considerably to reducing emissions from energy-intensive industry, whilst safeguarding jobs, industrial activity and economic growth.

Dr Graeme Sweeney, Chairman of ZEP, commented: “The Zero Emissions Platform supports the EU’s commitment to reach climate neutrality by 2050 and welcomes the provisional agreement on the European Climate Law. Over the next decade, the development of cross-border, European CO2 transport and storage infrastructure will be necessary to deliver on Europe’s increased targets and would provide EU member states with access to CO2 storage, creating a level playing field for the decarbonisation of Europe’s industry and energy sectors. Developing CO2 infrastructure would also create the opportunity for Europe to go carbon negative. The Climate Law confirms the role of carbon dioxide removals in the trajectory towards climate neutrality.”

CO2 transport and storage infrastructure is crucial to connect CO2 emitters across Europe to permanent geological storage for the captured CO2, enabling industry to take a cost-efficient and proactive role in light of the 2030 and 2050 climate targets. This infrastructure can also enable carbon dioxide removals and large-scale volumes of low-carbon hydrogen produced from reformed natural gas with CCS. 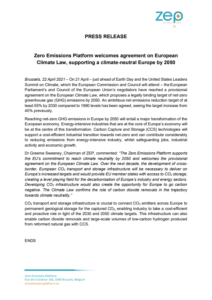